After a long day of traveling, we arrived in Ukraine yesterday but short of going out for drinks in the evening we didn't really get up to much.

Bright and early we got up to meet Igor, our Ukrainian tour guide. He has completed more than 700 trips into the exclusion zone (or simply "the zone") over the past seven years.

There are two zones within the exclusion area, the outer zone (30km from reactor 4), and the inner zone (10km from reactor 4) - these zones are crossed by passing through one of eleven checkpoints. It's not permitted to take photos of the checkpoints although I'm not sure sure why, it certainly didn't appear to be sensitive in nature. 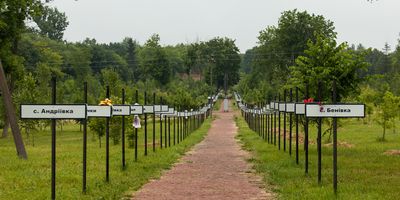 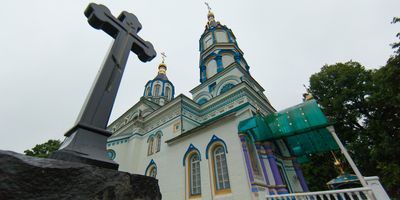 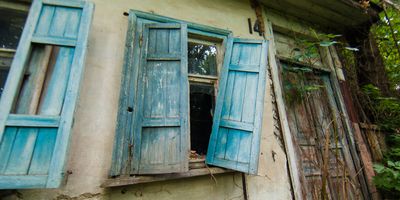 We had a minor scare when the guard at the outer checkpoint of the exclusion zone couldn't see one of our names on his list of permitted people coming into the zone, fortunately it was there!

After crossing the checkpoint we headed to monument square in Chernobyl town. Above are photos of an eerie path with the place names of each town with was evacuated within the zone, the only church which remains operational in the exclusion zone (the church is 720 years old), and the remains of a nearby village. 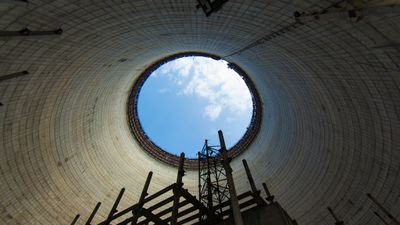 Above is a photo of the cooling tower which was being constructed for the new reactor number five at the time of the explosion. Here is stand scaffolding still in place.

After producing more echos than were really required we left the massive structure and headed to the site of the sarcophagus and the New Safe Confinement, NSC structure (reactor number four.) international rules state you can't take photos of a nuclear site - however so long as you focus on the sarcophagus, or NSC vessel Igor assured us it would be fine. 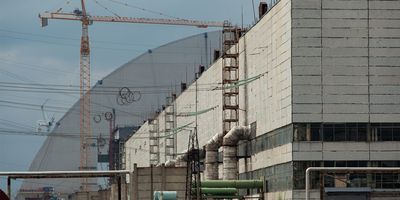 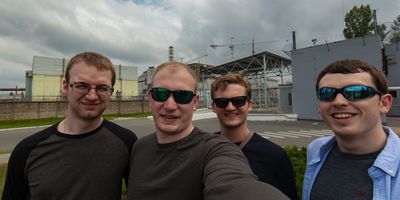 Our last "stop" of the day was where we'd all been looking forward to the most, Prypyat town. It was built with the sole purpose of housing the workers (and their families) for the nuclear power station. And if you've ever read an article / or searched for photos of Chernobyl you will recognise some of the sights, specifically the fairground. 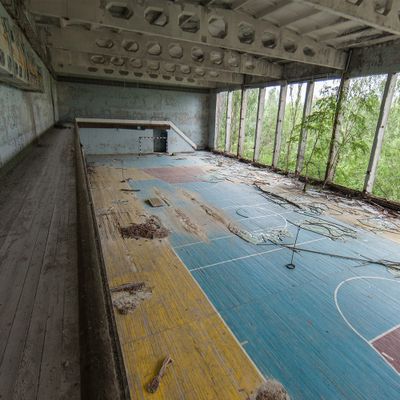 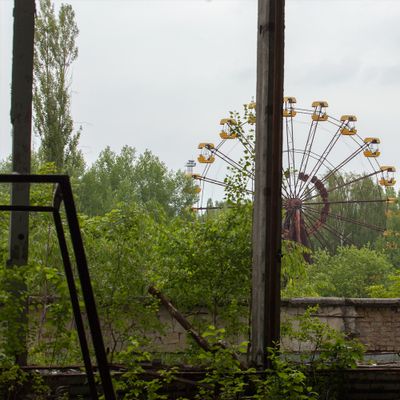 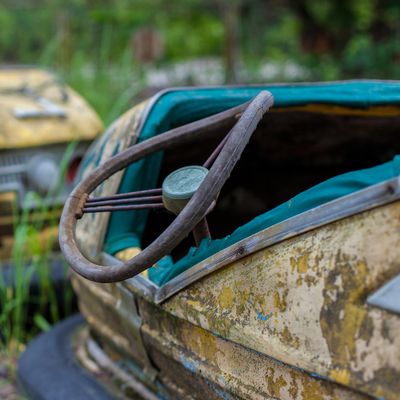 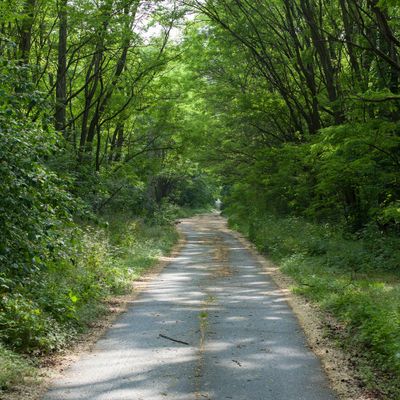 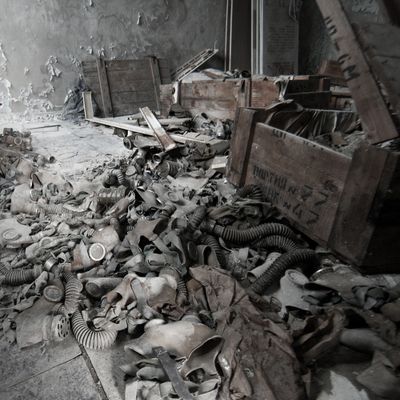 Before leaving Prypyat, Igor took us to possibly the best vantage point, at 18 story block of apartments from which it's possible to see reactor four (with the ferris wheel in the foreground), the NSC structure, as well as the Duga 3 radar. This was a prime opportunity to snap some photos of us with the reactor in the background. 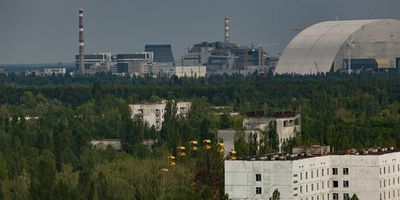 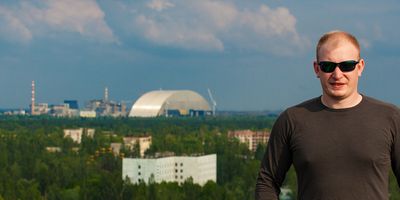 Igor was a brilliant guide, and his dry sense of humour was perfect for us Brits. We were staying in a hotel within the 30km exclusion zone that evening and he talked about the curfew and the restriction the sale of alcohol in the exclusion zone he said this;

You can only buy alcohol from 7pm to 9pm - but the locals are professional, they can get drunk in only 20 minutes

Last night while discussing the events of the day over a beer at the hotel we wondered what would be in store today thinking we must have seen most of the popular places by now. Igor was not about to disappoint us.

We first went to a town called Parishev to visit the self-settlers who were allowed the re enter the exclusion zone to live, we bought food as gift and Irgor translated for us. We spoke to a 81 year old man who has lived here since 1958, he built his house by himself, we met him as he was peeling potatoes. He had an old car which he dubbed the "911 of Ukraine" - because it was rear engined.

It felt weird taking photos of the self-settlers however the man lowered the barriers early on telling us all to feel welcome, and take as many photos as you wanted. 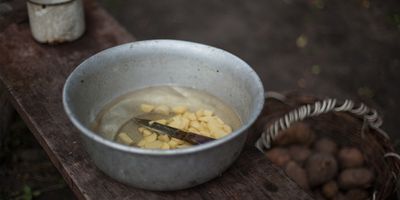 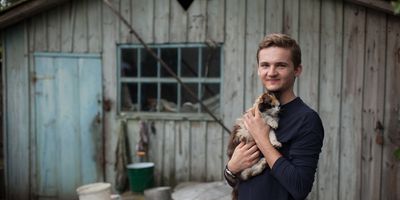 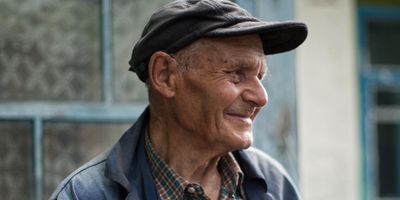 Our next stop was Duga 3, an over-the-horizon radar system built by the Soviets, it would often broadcast in the shortwave radio bands, as a repetitive tapping noise at 10 Hz - this caused it to be known as the "Russian Woodpecker".

All four of us started climbing the radar; but Connor Newton, and Ed Baxter were put off by the rickety ladder. Myself and Ed Reeves made it to six stories up - and would have both gone higher has time allowed. 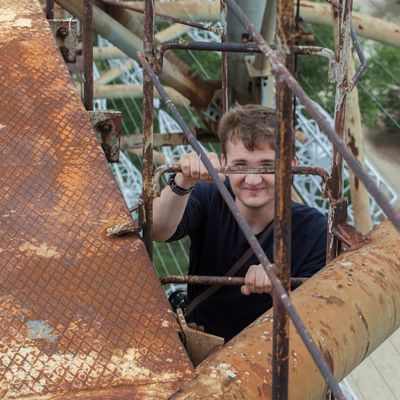 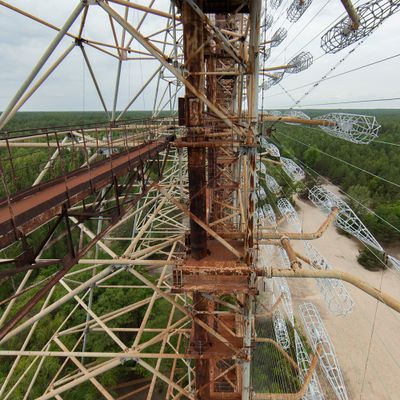 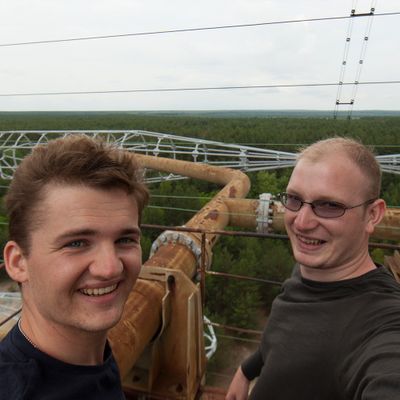 We headed back to Prypyat to see some of the things we missed yesterday Including; the school, hospital, cinema, jail, and garage.

Below are photos from inside Prypyat hospital, one of the buildings with the highest levels of radiation due to the contamination brought by the first responders to the explosion. 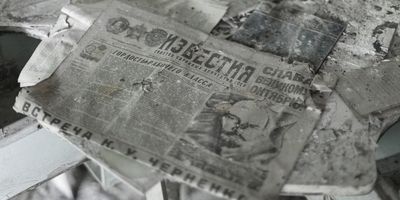 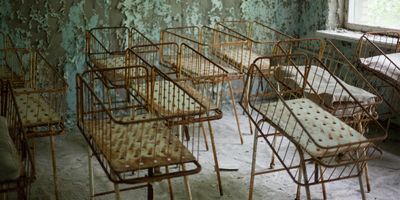 At the abandoned lakeside Café there was an incredible window, it looked like stained glass, however it was in fact different coloured glass panes on their side to create an image. 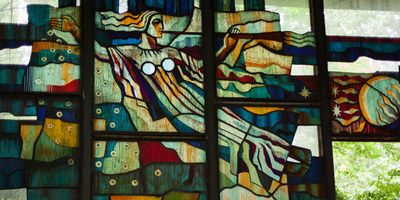 We had lunch at the cafeteria for the NSC structure workers. Igor took us to an abandoned children's summer camp within the 10km zone before first leaving the 10km zone and then passing from the 30km zone and driving on to Kiev.

I asked Igor about adventurers sneaking into the zone, many do, the penalties are approximately; 200uah for the first offence, 2000uah for the second one, and prison for the third.

After two very busy days we were all a little tired, that evening we found the most highly rated burger place on Tripadvisor and it was indeed a good burger! Still not quite getting over how good the exchange rate is; a cocktail, burger (with fries), soft drink, and a desert for less than £10 - happy days :)

After a spotty nights sleep, I got up early and picked up four McDonnald's breakfasts for the group. Had a shower and we set off for X-Park, planning the route to take us past the friendship arch.

My plan was to take the guys paintballing, however we ended up watching some people wakeboarding before getting a pedalo between the four of us - the language barrier was a little tricky as the people there don't speak much english - but Connor was a trooper and sorted us out! 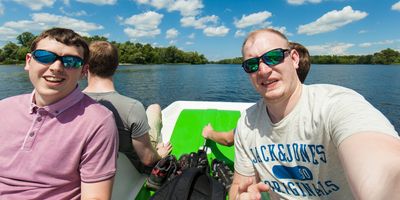 We walked back to a metro then traveled the 7 stops down the line to get us back into the centre of Kiev (it's about 10p per journey - regardless of distance - on the metro.)

After having a shower I was feeling very refreshed (unlike everyone else) so I went to check out some of the sights in Kiev I hadn't properly looked at (freedom monument, and the churches.) I headed for bed early, mindful that we had an early start the next day.

The best nights sleep I've had all week, just what I needed! Again I got up early to pick up breakfast for the four of us before meeting the minibus at 7am to take us to the missile base. The journey was about 4 hours hours and motorways in Ukraine aren't the smoothest so after a bumpy, hot drive we arrived at the missile base to start our tour.

We met our guide at the entrance to the museum and she showed us how the missiles operated and the layout of the base. We then used the tunnels to go from the entrance over to the controller bunker, where we descended ten floors to the control room itself. It was very tight and it's hard to imagine how several people would have been able to work in that area for days at a time. 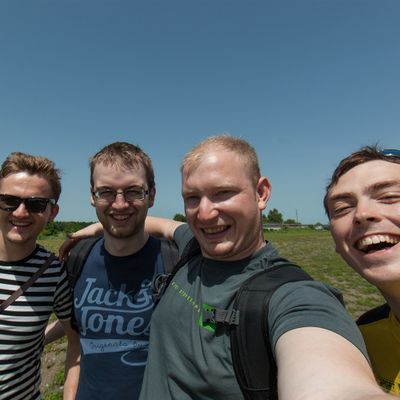 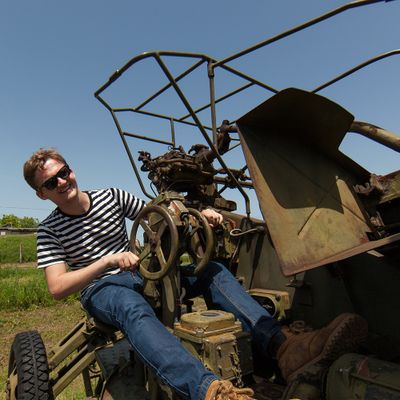 While jumping up onto a tank (in denim shorts) I hit my shin which caused quite a worrying buildup of fluid in my leg. And writing this up some five days later it's still ver painful :/

Traveling back on a minibus with temperatures hitting 30°c was even worse than on the way there. I must admit I would advise anyone else doing this to spend a day exploring Kiev, I don't think the 8 hours of driving was worth the 2 hour tour (although it was a great experience.)

Earlier in the week we'd spotted a local Italian restaurant, and we headed there for our dinner before grabbing some souvenirs and getting a drink and heading back to the apartment to pack.

Above is the video from the trip, I made the mistake of not planning what to shoot, which ultimately led to a lack of direction in the video, but I hope you can see past that :)

I had a brilliant time, and I'm very glad I could experience what it's like in the Chernobyl exclusion zone. Maybe one day I will return - if I do I would love to take my quad copter.