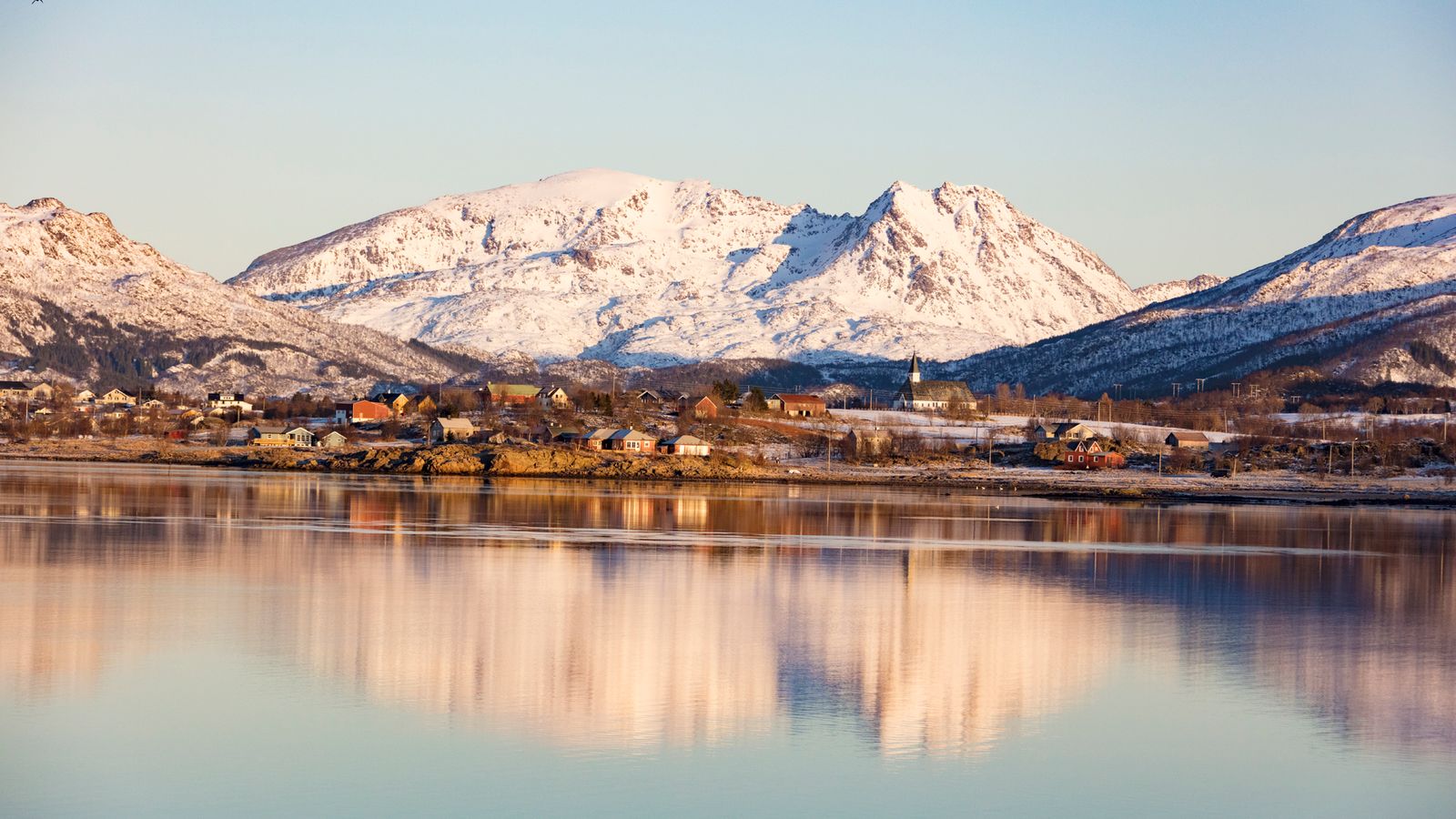 My mum and I had been planning this trip for a while before we approached Discover the World who planned the logistics, getting the first quotation for our trip in March 2016. We travelled from London over to Stockholm before a short layover; grabbing some food overlooking the runway, and a few hours sleep before flying up to Kiruna in Northern Sweden.

After arriving in Kiruna we got a transfer directly to the Ice Hotel, it's something we've both been looking forward to for years at this point so we went off to explore the rooms which are all open during the day. 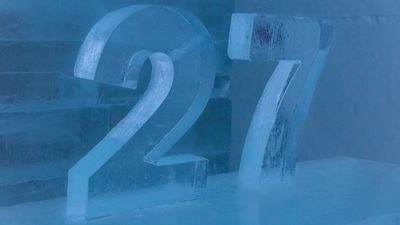 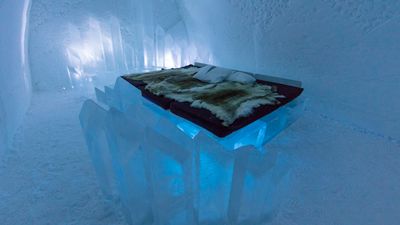 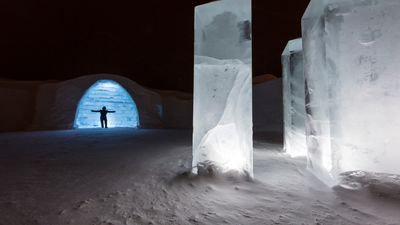 By 3pm the light was beginning to fade, we headed to the ice bar and enjoyed a cocktail sat (on ice benches covered in reindeer fur) among the stunning ice carvings. For dinner both of us enjoyed an impressive tasting menu at the on-site restaurant.

Our first night in the Ice Hotel was spent in an ice room (the bed shown above) - it's fair to say we were a little nervous in the hours leading up to going to bed, but the staff were brilliant. We were each given a thermal sleeping bag and told to make sure we wear a hat. 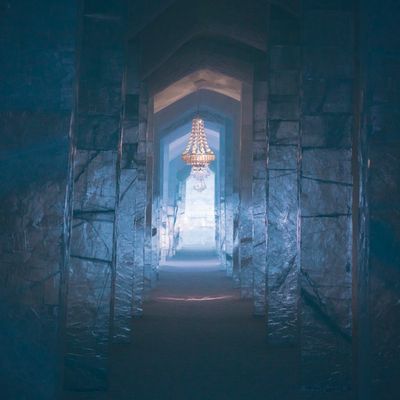 In the morning we were awoken (after sleeping soundly all night) by one of the staff members who gave us a hot cup of lingonberry juice. And by 8am we had cross country skis on our feet and were setting off across the lake with our guide, and another girl who was just as inexperienced as us. 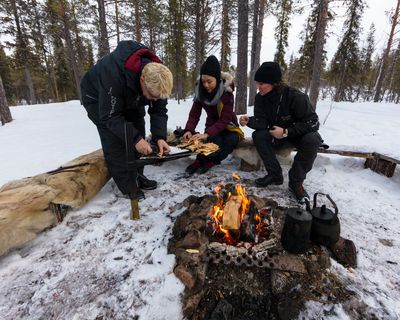 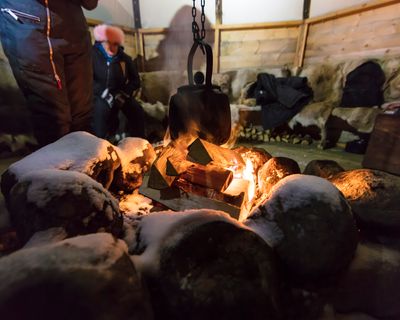 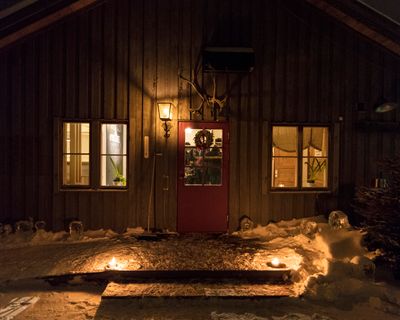 After skiing for a while we stopped in the woods on the other side of the lake for fika, meaning to have a coffee break. Our guide taught us how to use a fire steel to start our own fire which was good fun, and all three of us eventually managed to convert sparks into flames.

Once we'd done a little more skiing (and falling) we made our way back to the main complex and headed 20 min down the road to a Sámi camp which our guide had told us about, there we spent some time petting the reindeer and reading about the Sámi people.

In the evening we had booked a husky sled, to whisk us along down the valley for a unique view of this wonderful landscape. Part way through we stopped at a camp for more fika while our guide told us about the dogs which has hauled us out here.

Our husky musher dropped us off at our restaurant on the way back to the Ice Hotel, and after a very homely meal we crashed out in bed (a warm room this time.) The next morning it was time to wave goodbye to the Ice Hotel. 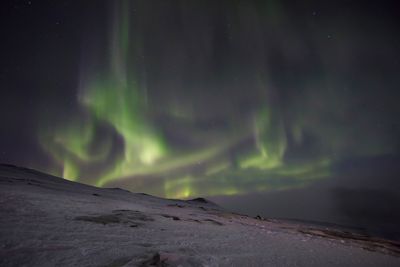 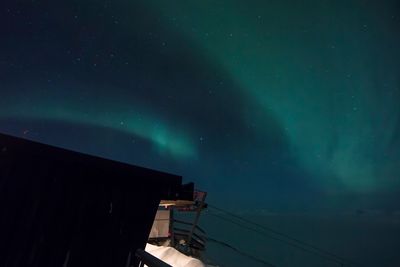 We got a train from Kiruna over to Abisko, arriving at around 3pm (having watched the sunset while we travelled through the mountains.) We checked into our hotel, pretty much the only thing around here. Made a reservation for dinner, and after enjoying a wonderful dinner we went and got dressed in our thermal clothes for the real reason we were here.

The Aurora Sky Station. Having not seen the Northern lights while at the Ice Hotel we were really hoping to see something here, and we were in luck. Almost immediately after getting off the chairlift at the top of the mountain my mum spotted the shimmering lights in the sky.

Hours later, having spent almost all evening out in the -20°c we weren't cold but were ready to head back down the mountain having thoroughly enjoyed many aurora sightings.

The next morning we headed back to the base of the mountain and explored some of the footpaths we had navigated with a torch the night before. By 10am we were ready to take our final train of the trip, from Abisko to Narvik. The train afforded us some brilliant views of the countryside including the fjord, Rombaksbotn. 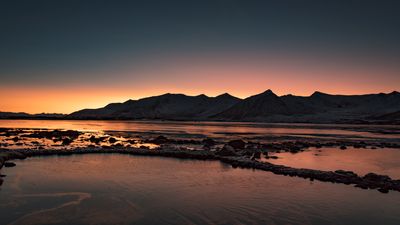 We had a bus ride from Narvik to the Evenes airport where we picked up a hire car. I'd passed my driving test four months previously (but hadn't driven since) so naturally with it being pitch black, icy, with a steering wheel on the wrong side ect.. I was the clear choice to drive the 120km to our hotel.

The next morning we were heading to the Northern tip of Andøya and the Andenes Lighthouse (seen in the photo below.) At the end of the day I was driving back down to the hotel we had stayed at the night before, taking a stunning sunset (shown above.) 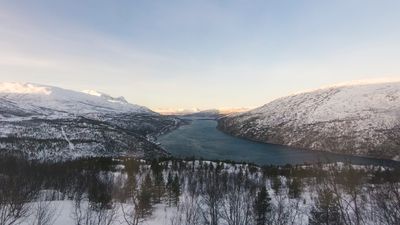 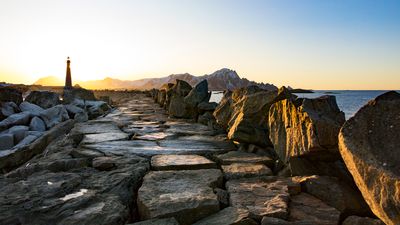 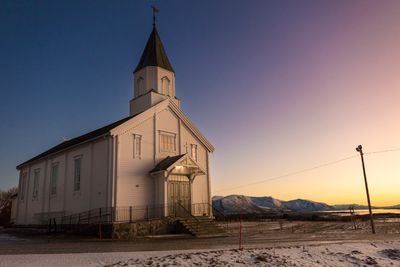 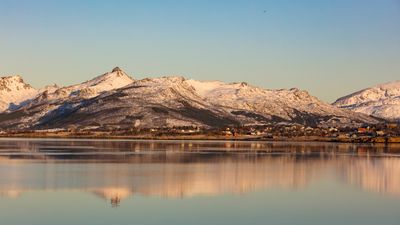 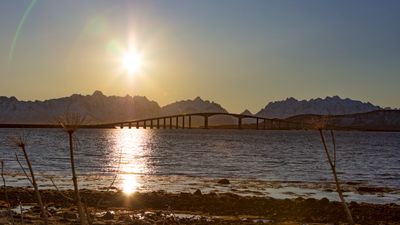 Now our 7th day we drove over the Hadsel Bridge, shown in the photo above with the mountains silhouetted in the background, and caught a ferry from Melbu to Fiskebol crossing the Norwegian Sea which was bracing! 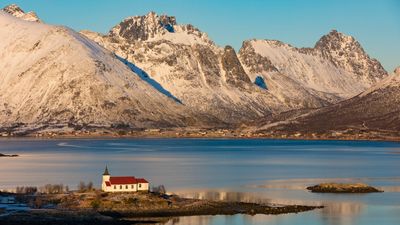 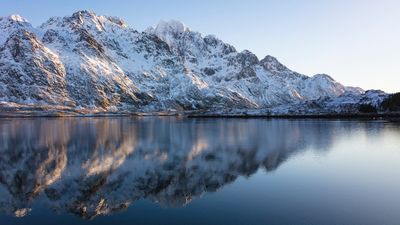 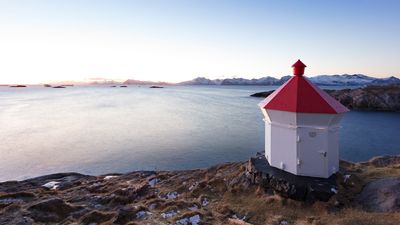 The first two photos above are from our drive down from Fiskebol to where we were staying, a fishing hut in Svolvær. We checked in before heading South down to Henningsvær another fishing village which offered great views out to the Buksnesfjord fjord, which is the third photo above.

I drove us back to our accommodation, getting some food from a supermarket, and as we were eating we spotted the Northern Lights clearly visible through the window. 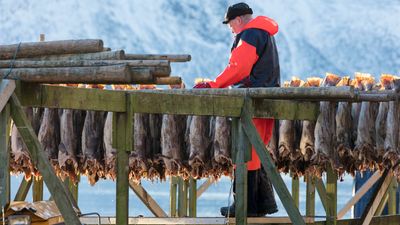 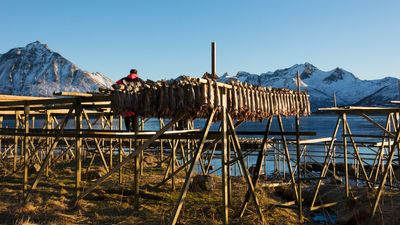 Driving the next morning we came across fishermen hanging fish to be dried on racks by the side of the road. Later in the day driving up a steep road to a church where we found the fluffiest cat I've ever come across, the two of us spent quite a while petting it before continuing on our drive as far South as we could on the Lofoten archipelago, we arrived at a village called Å.

We explored the two fishing museums, which are built on the site of an old fish landing station, they are raised on stilts to allow a boat to come alongside. Towards the Southern edge of the village is a cliff edge with views out to sea (first photo below.) 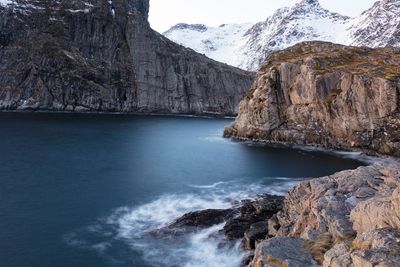 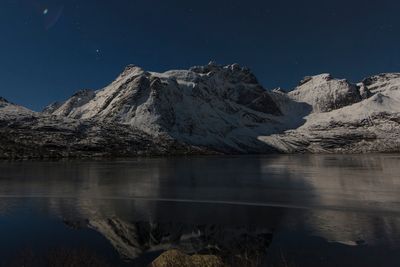 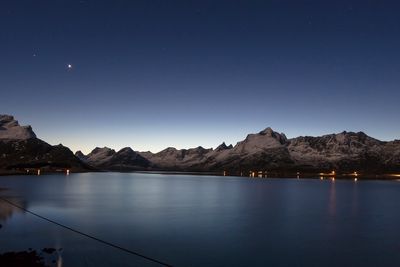 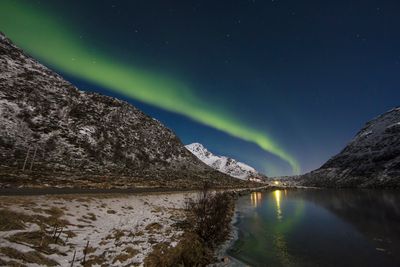 In the evening I drove back slowly in the hope of seeing more Auroras, and as you can see above, we did :) 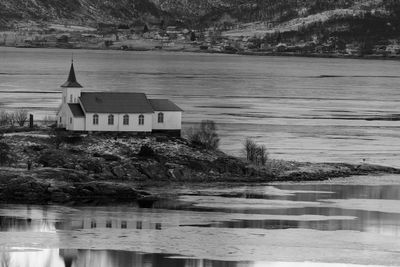 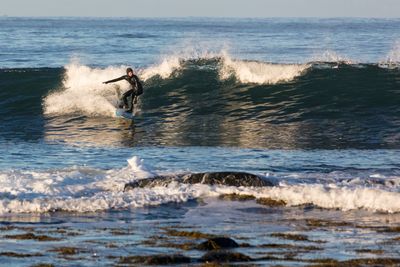 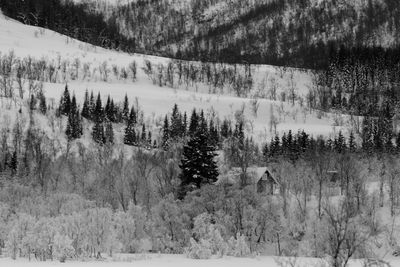 Our final proper day in Norway saw us driving back North to drop off our hire car at Evenes airport and fly down to Oslo. We spotted some surfers off the coast, who on the whole were doing pretty well, but we saw a few get wiped out.

Finally; a panorama of an aurora captured earlier in the trip. I have so many more brilliant photos from this trip, it's just not possible to share all of them.